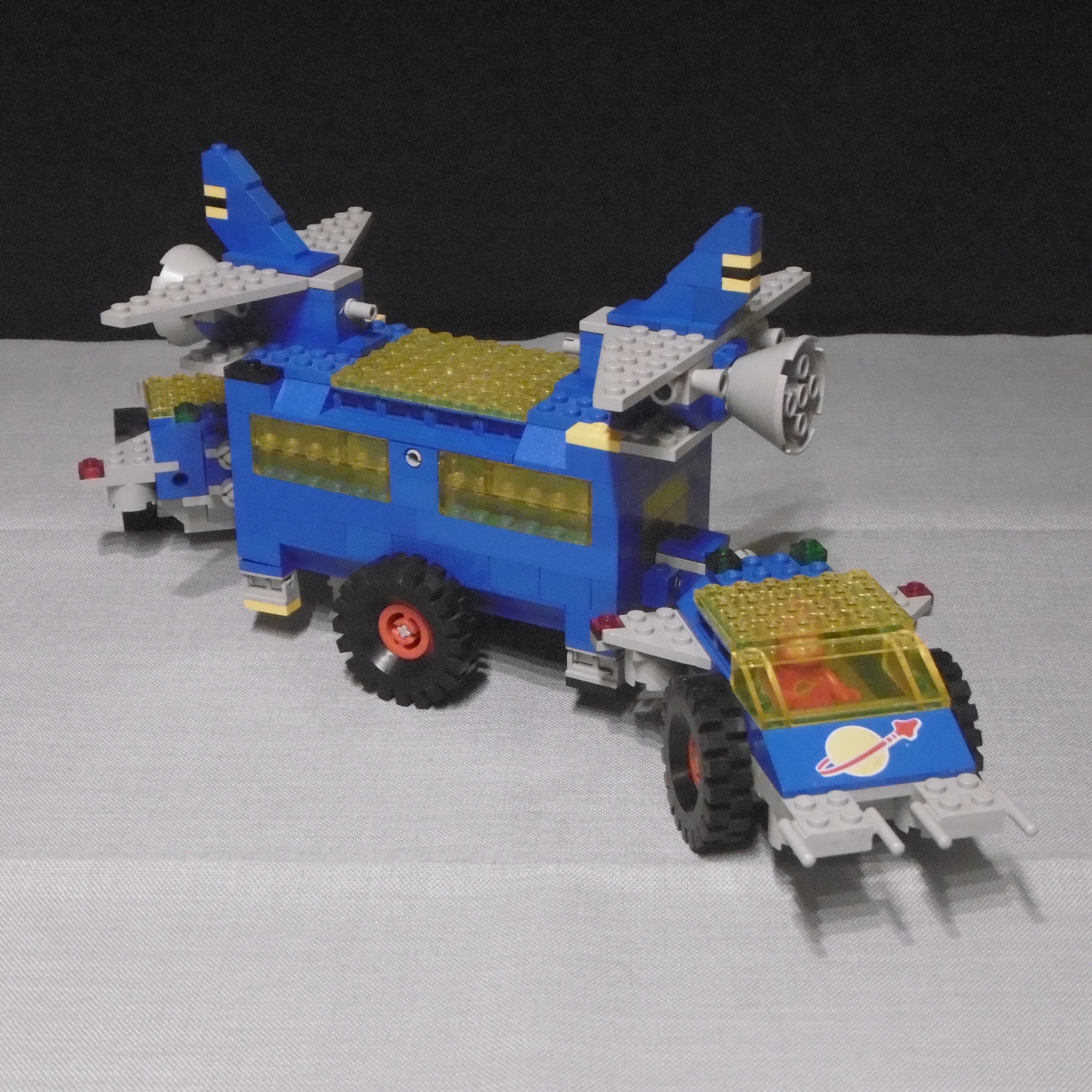 A 1979 version of the Classic Space 6952 Solar Power Transporter from 1985, including a middle section with a small transportable base.

This was my “bigger” space project I have been working on the last few months. 6952 has always been one of my favorite Classic Space sets of all time. I always wanted one (my cousin had one), but have never bought one (Hey that’s a good idea for Christmas…). So I thought about it and how it might have looked as a 1979 set (still my favourite CS era).

The design process (with LDD as usual) already took it’s time until I had the final idea for the middle section. The building process instead didn’t take much time, as I already had most of the needed parts in my CS parts collection.

First thing first – These are my two little Vic Vipers that I’ve already posted for NNoVVember 2017: 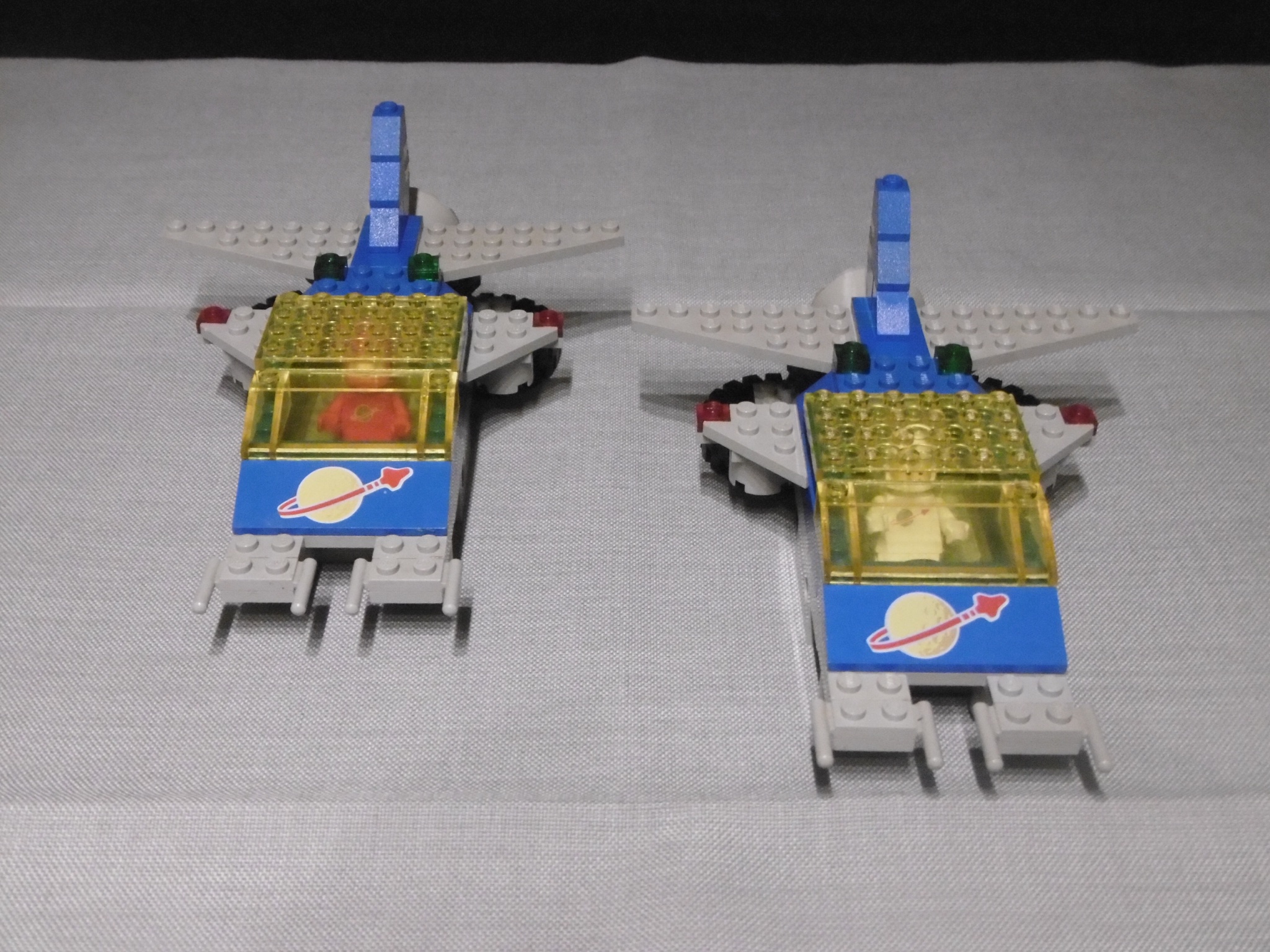 The Vipers remain unchanged. They only wear two additional truck wheels underneath their rear wings. The first designs of the scout ships had a single “nose” and no single tail fin. But when I thought about a Vic Viper for NnoVVember 2017 I thought that they would look really cool with these two design elements.

You can have a better look on the wheels on this picture: 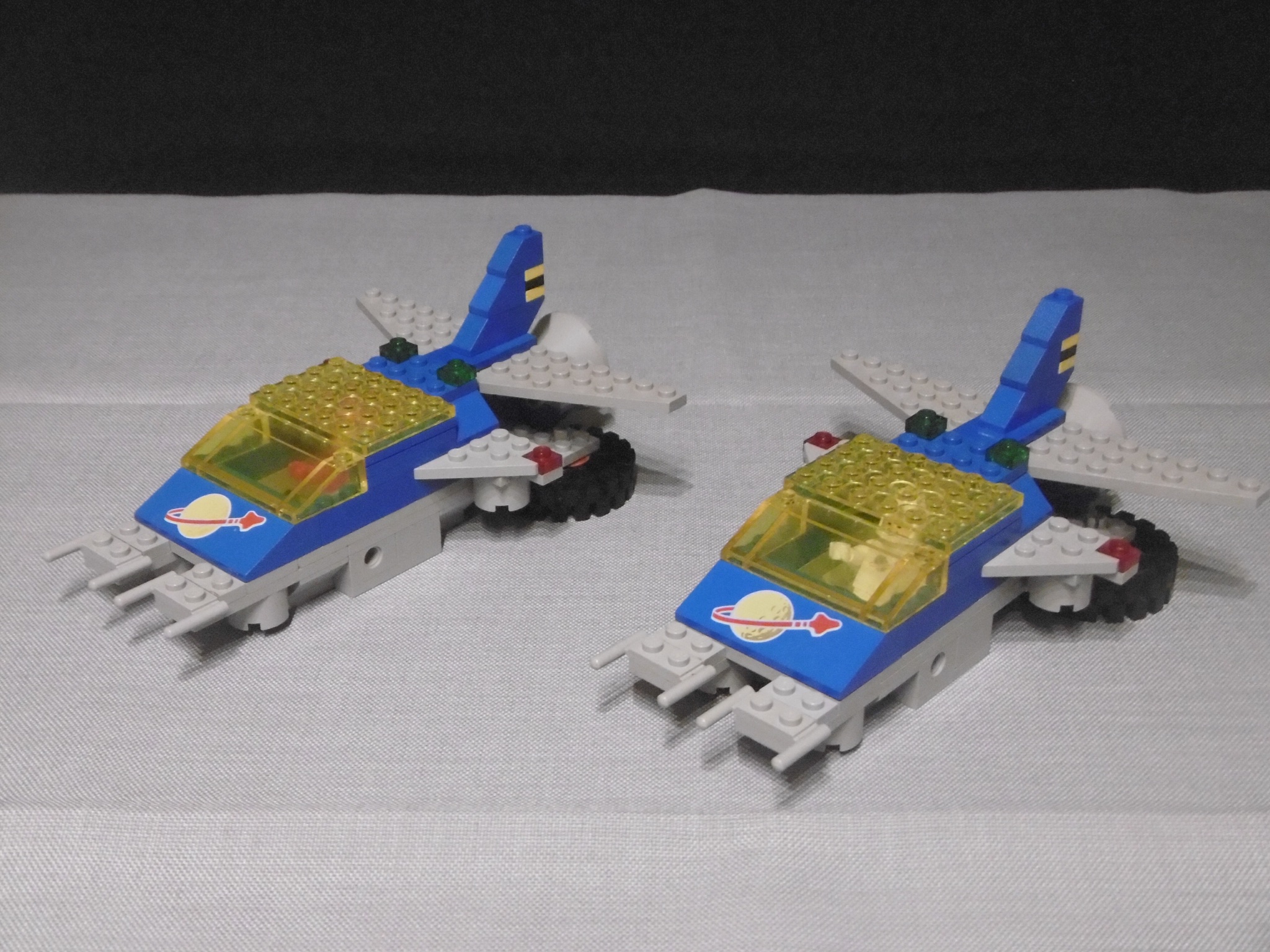 You can also see the holes on the side needed to fix them in rover mode.

The rear wing sections can be disconnected to build the rover:

Add the wheels, connect the cabin sections and there you go, just like the original model:

And now it’s time for the middle section:

This is only a small modification of my Transportable Base posted in January this year. I’ve added four foldable “feet” in the corners, two foldable supports underneath and two centre “feet” to fix two wheels.

A little modification of the doors*, two extra 1×4 Technic bricks on the side, and that’s it…

* Oops, there is a 1×2 inverted slope missing on the left side (must have been my son). I didn’t notice that when I took the pictures – Too late now! ;-))

The interior still is quite the same: 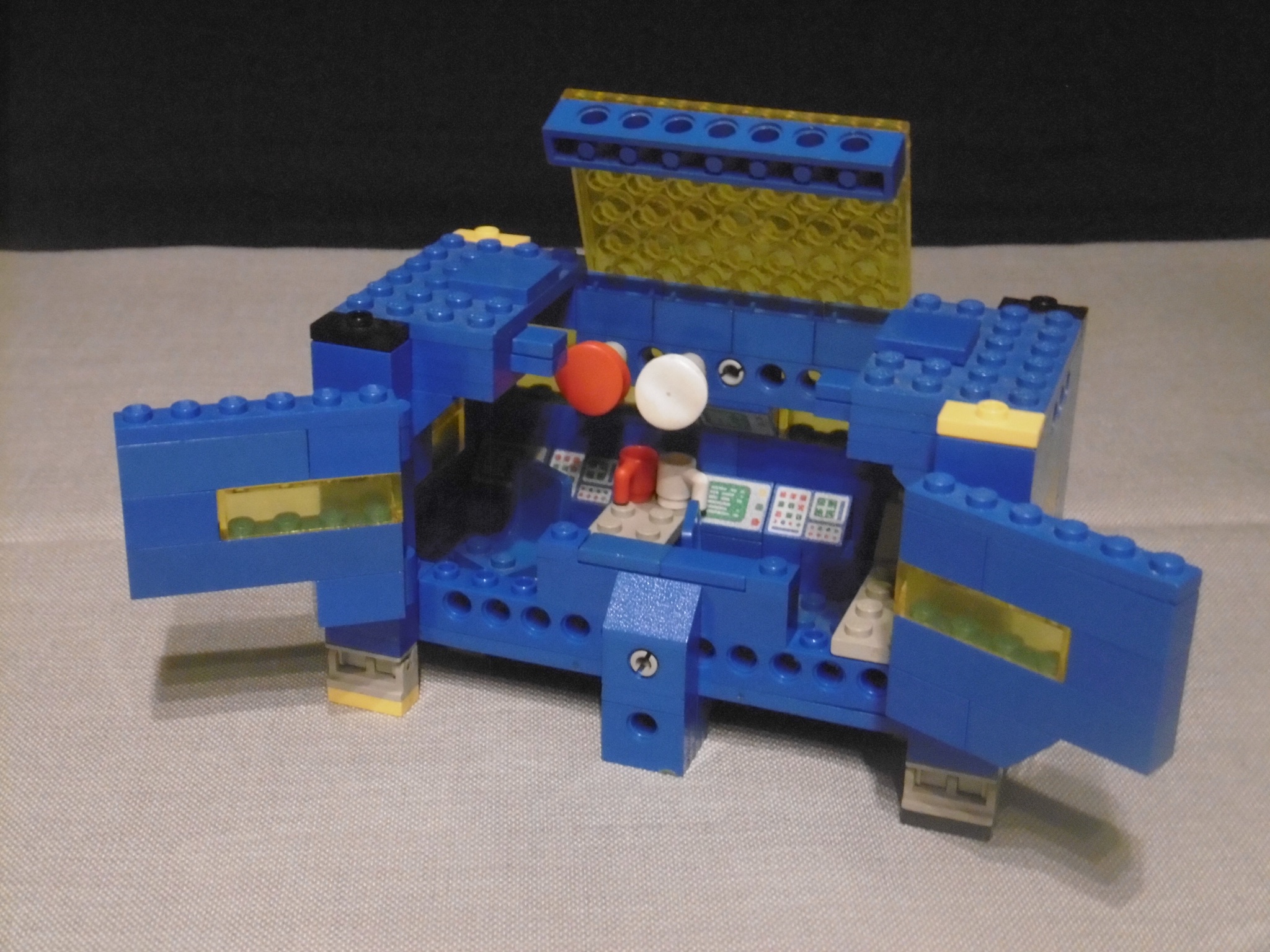 There is only a little change for the wheel holder. The corners can be used as a holder for the Astronauts’ oxigen cylinders.

Just add two wheels, fold down the grey side supports, fold up the corner “feet” and you get a nice little “Space Caravan”: 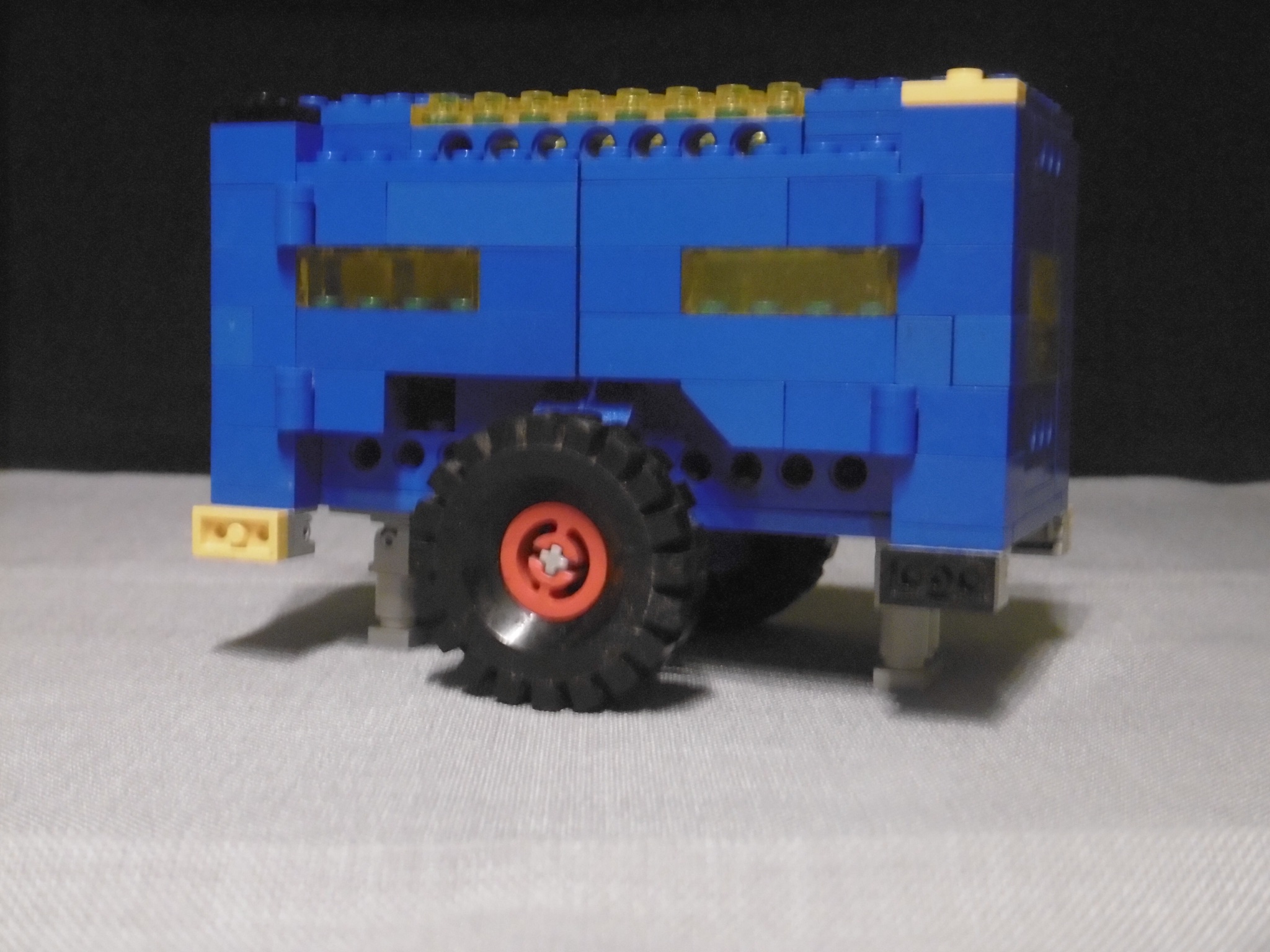 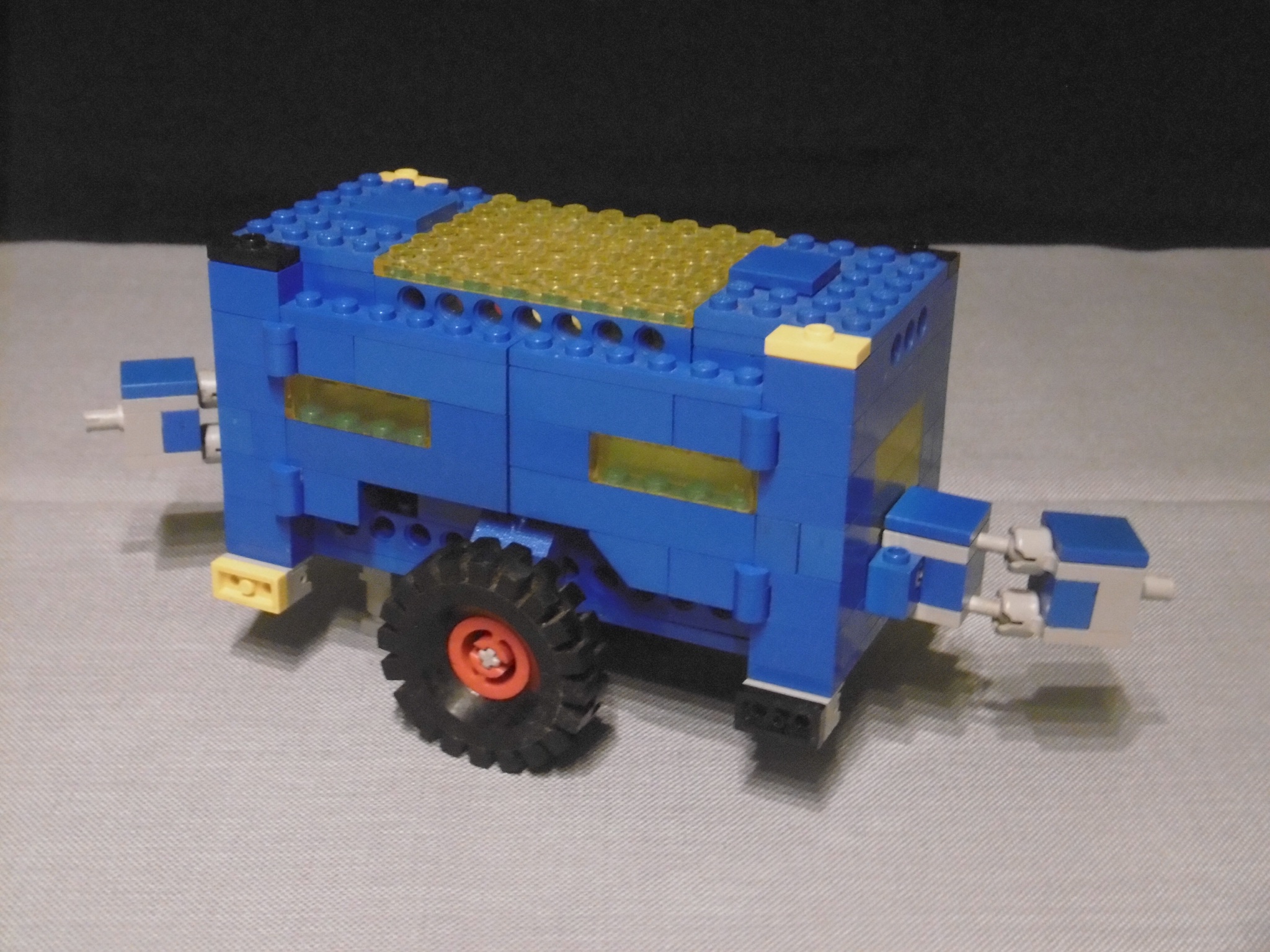 … and you are ready for the big expedition vehicle: 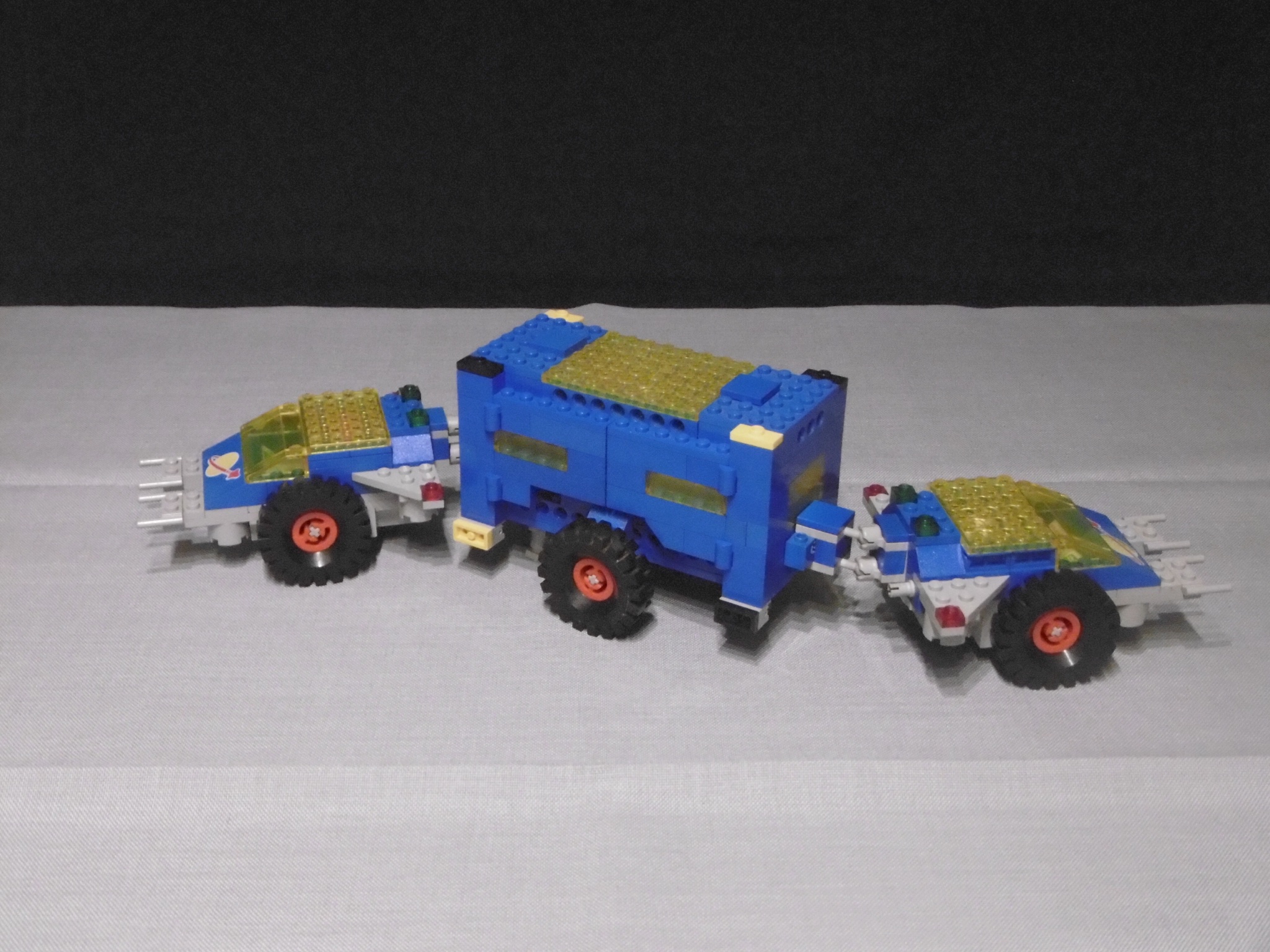 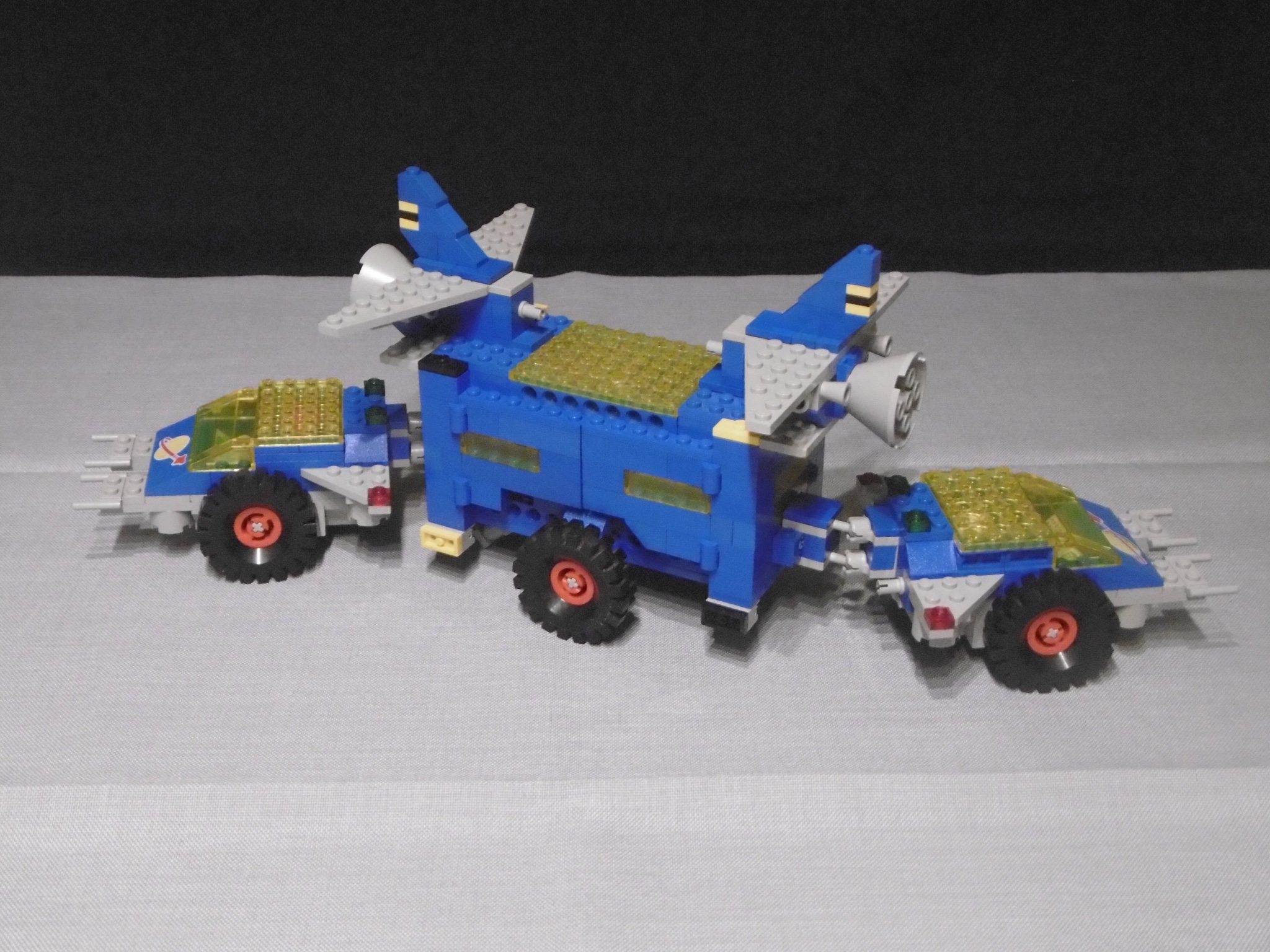 The rear wing sections of the scout ships can be attached on the top of the middle section, just like on the original model. The roof can still be opened.

A single cabin section can be seperated and operate as a scout ship while the rest of the vehicle moves on: 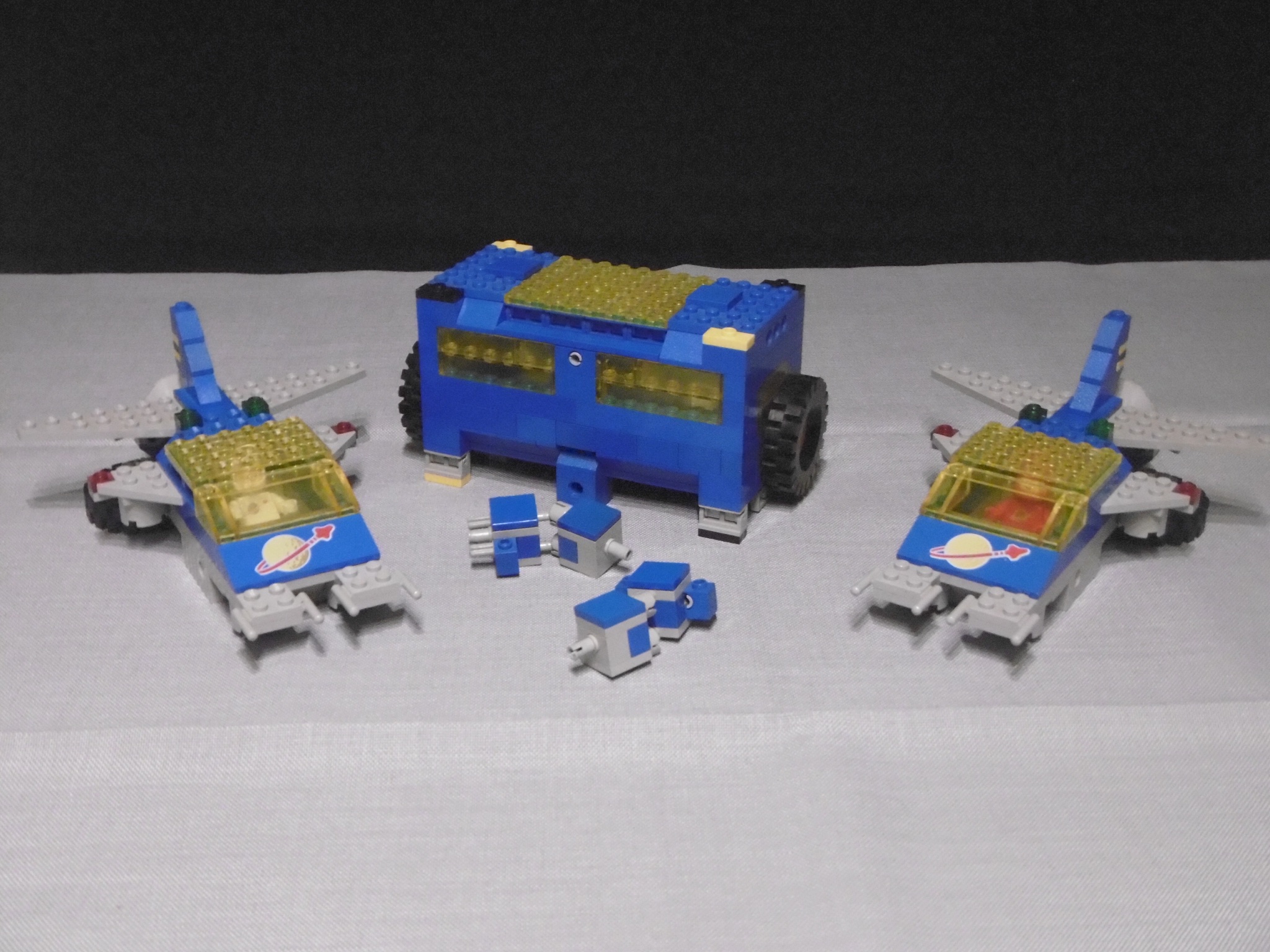 … by the the  LL926 Space Crane Transporter: 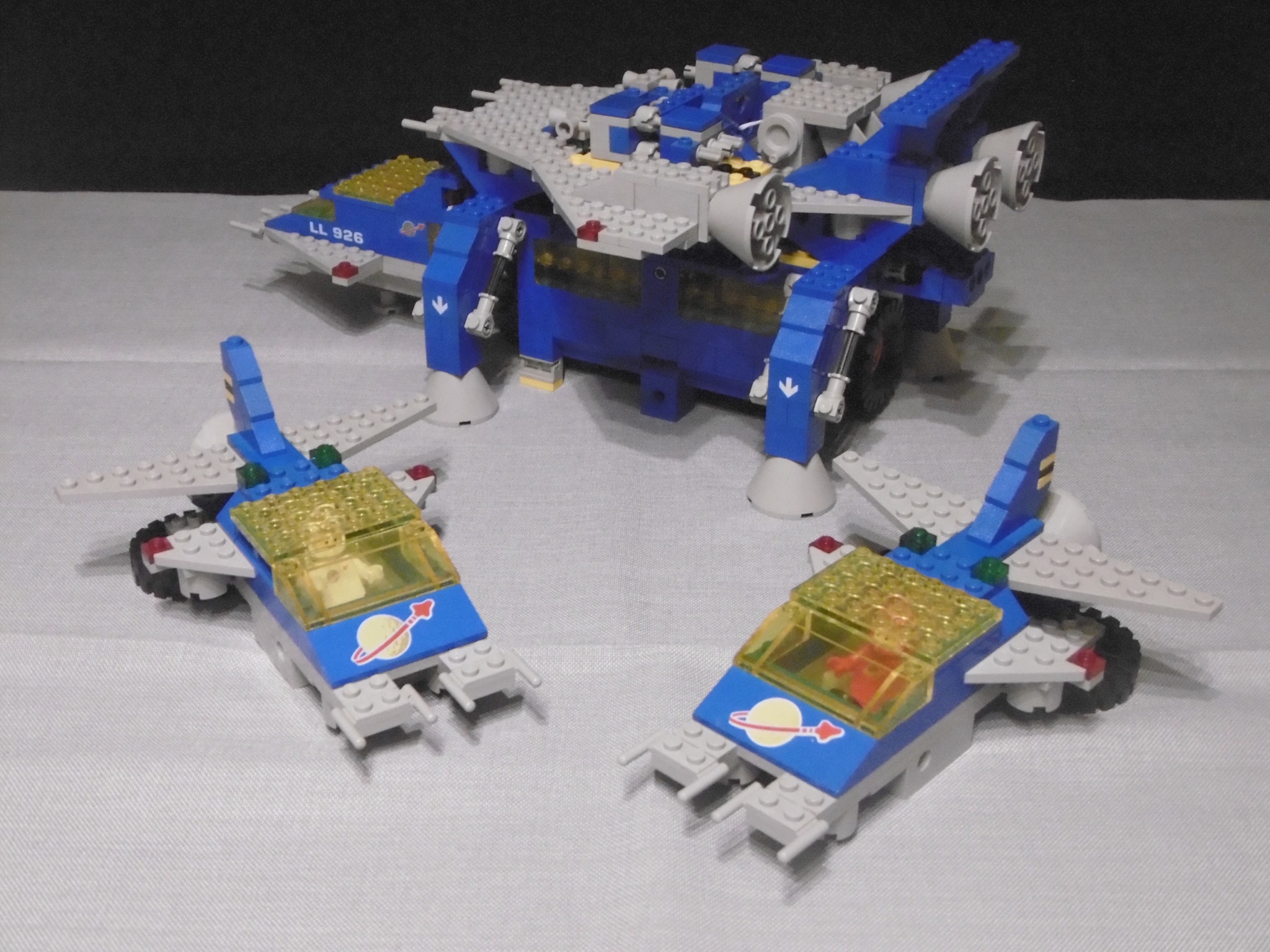 With a little modification on top of the wing section LL926 can carry the middle section and the couplings. 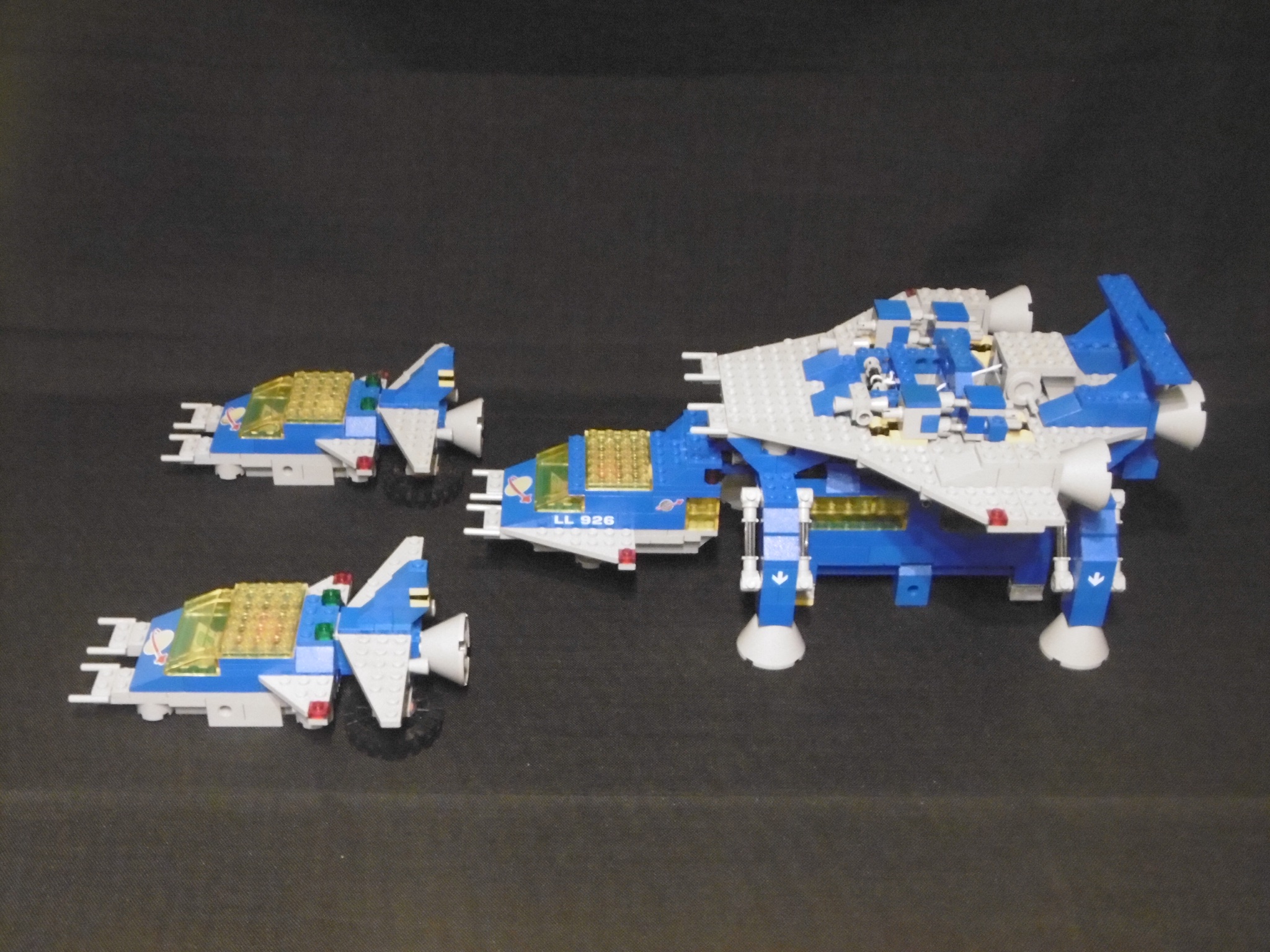 So this is my 1979 Lego Classic Space Solar Power Transporter.