A childhood dream come true: This is the Moon Base I would have loved to have when I was a kid: 9×3 baseplates filled with stations, vehicles and spaceships.

It was 1979 when I saw the first pictures of the new Lego Space sets. Everything was so new, so cool and so different from what Lego had been before. Lego Town (now City) had just started with the new minifigures and sets where those could live and work and move with. The only space set available before was the “bricky” Lunar Lander 367 from 1975.

And then came Lego Space, the first generation (G1) with the iconic blue/grey/trans-yellow colour scheme. We all wanted to have the three space ships (LL 918, LL924 and the epic LL 928), the space station, the rocket base and everything else from that catalogue.

I was lucky to get about half of the sets, but after a few years the G1 sets disappeared from the shelves without a real chance to get the missing sets. There was no Internet, no Lego shops and the kids who had the sets wouldn’t give them away. So when the first sets started to appear on local flea markets I was already spending my money on Lego Technic or games for the Commodore 64.

After my dark ages, the discovery of bricklink and with more money that I ever had as a child, the old dream of a really big G1 space base came back.

My first CS model after my dark ages was built for the first MOCpages Classic Space Pocket money contest. With 100 parts or less the goal was to build a model that could have been a real affordable set in the Classic Space years. The result was my 892 Surface Explorer. It was a lot of fun to build that and it’s still on the moon base today. This one really restarted my enthusiasm for Classic Space.

The model was followed by a small space ship, a mod of the 6890 Cosmic Cruiser in G1 design with “Vic Viper” applications and a G1 version of the 6876 Alienator.

That was more or less when the idea of the big base really took form.
My original plan included the most iconic G1 sets:

I also wanted to build some of my all-time favourite newer Classic Space sets with a realistic G1 look, including:

And the centre of the base should be a modular, big station with detailed interiors and as many functions as possible.

The most important part of that is the word “modular”. I wanted to have a module unit similar to a standard (ISO) shipping container for cargo units. station modules and more. I decided to use a box with a size of of 8x16x8 (WxLxH) bricks as a “Space Container Unit” (SCU) for that. The rest of the base started evolving around that idea.

Instead of buying or rebuilding 926 Command Centre and 920 (Alpha I) Rocket Launch Pad I decided to build my own versions of them based on SCUs. I call them SC 926 and SC 920. I also adapted my new versions of 6927 All-Terrain Vehicle, 6952 Solar Power Transporter and 6980 Galaxy Commander to carry an SCU. And finally I built my big “Gamma I” station based on 6 SCU modules.

My first layout had 18 (3×6 baseplates) and was already too small when I assembled it the first time: 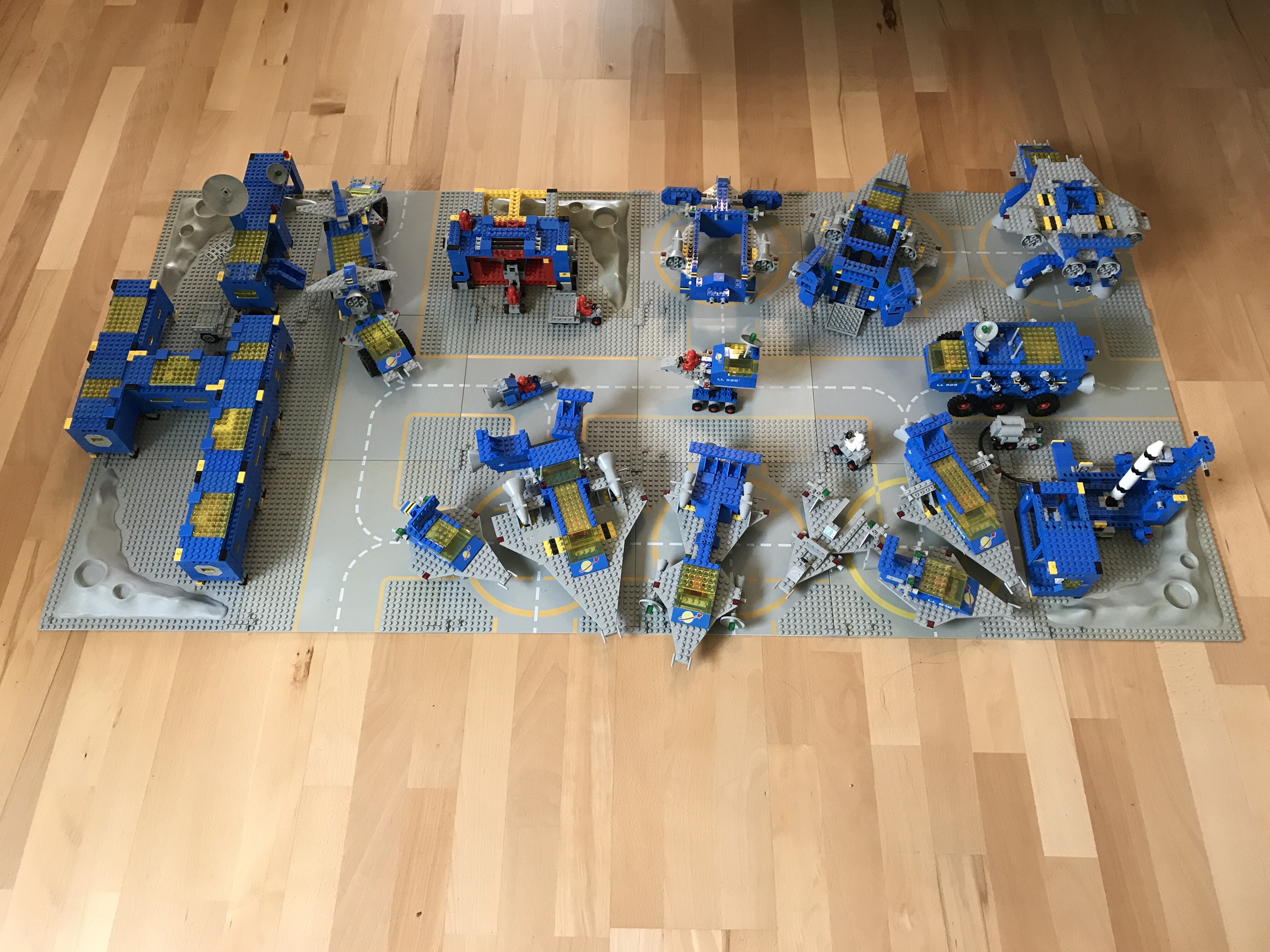 The next step was a 8×3 layout with more space for space ships, vehicles and cargo. 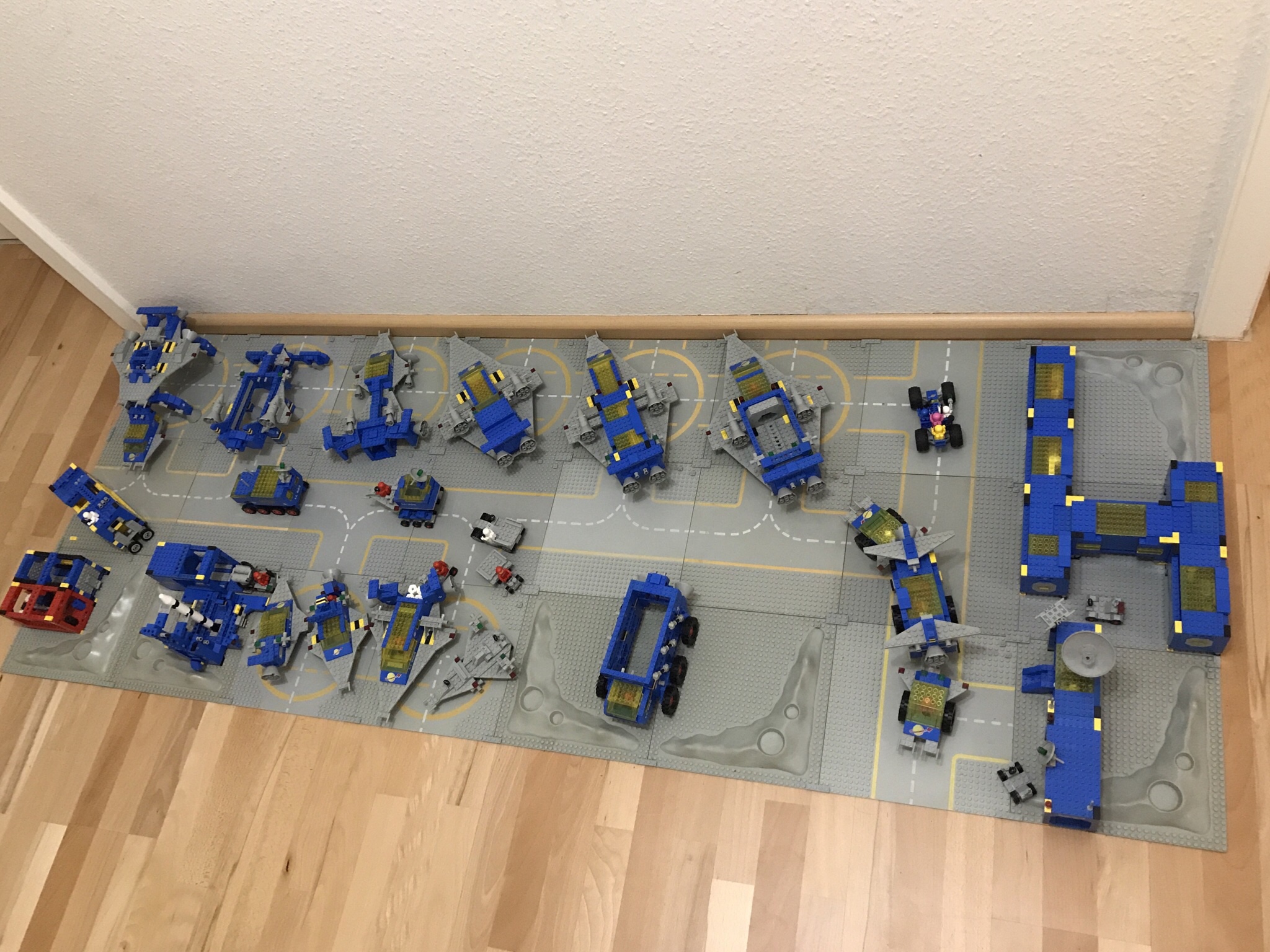 After that I was lucky to get the Classic Space collection from one of my oldest friends for a price that satisfied both of us. It included a 926 Command Centre and a 6970 Beta I Command Base, adding 3 more crater plates to the layout, now with 27 (9×3) baseplates. This is now the maximum size for a long-time display in our quite spacious corridor.

So let’s take a closer look… 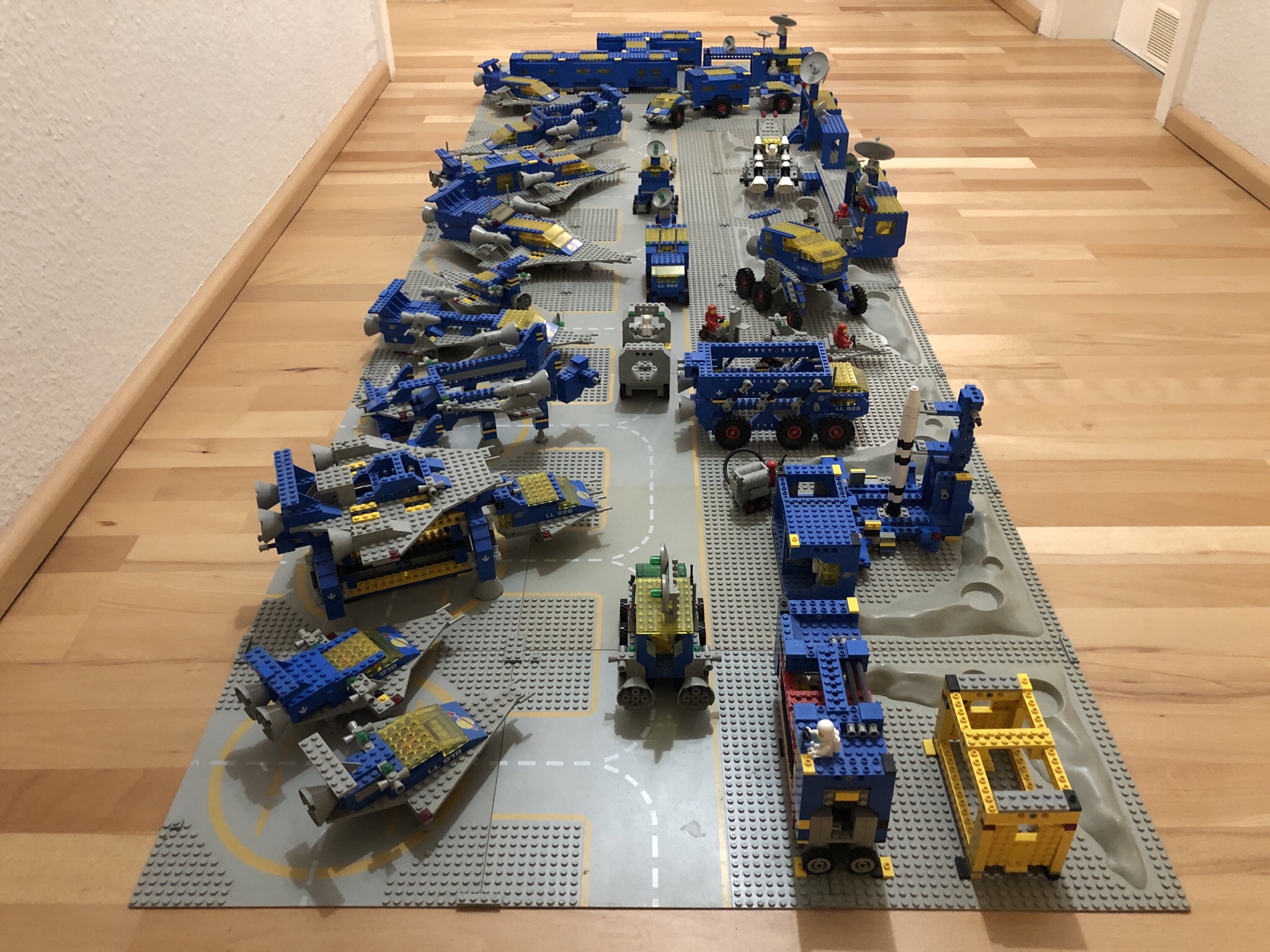 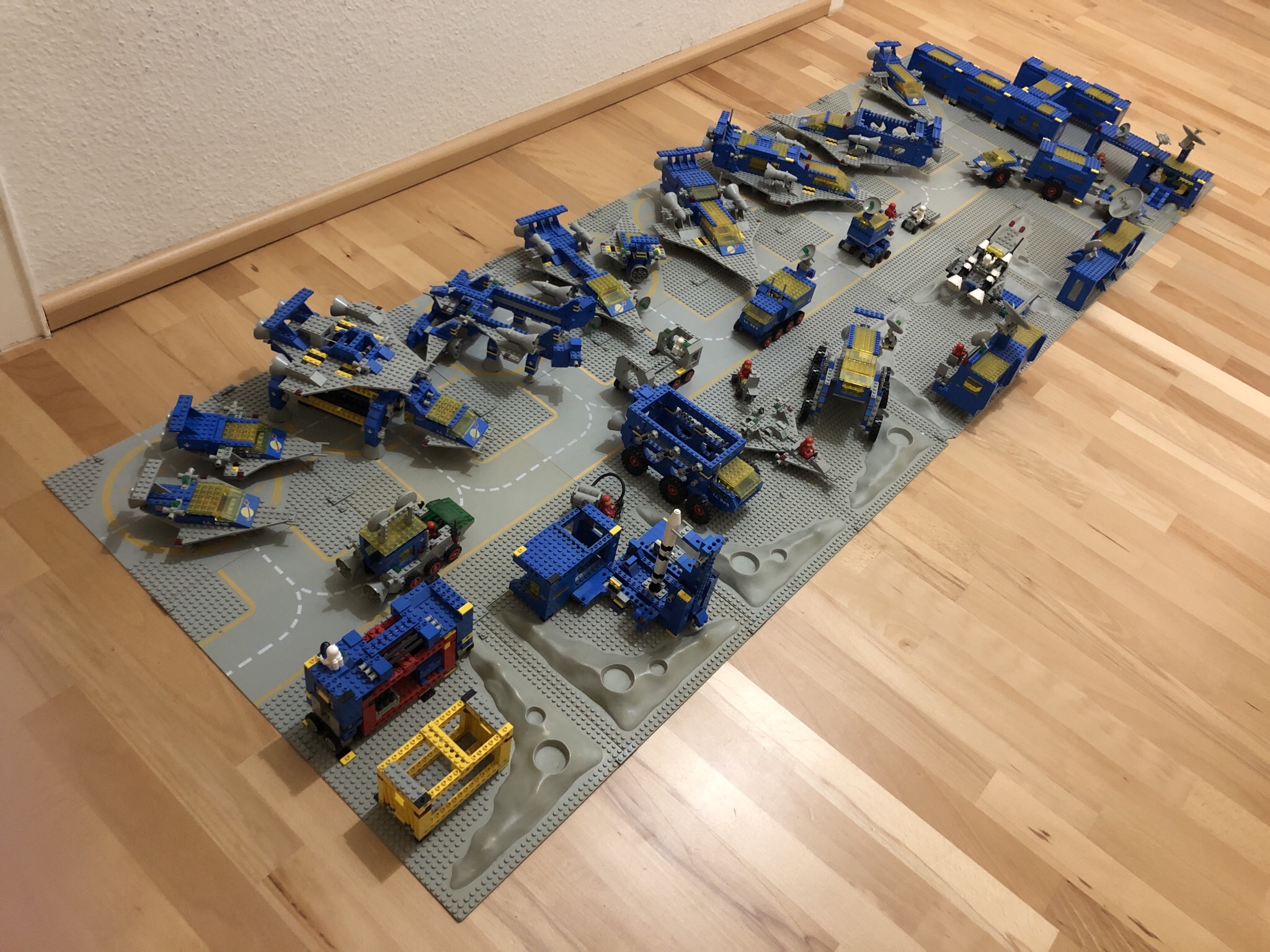 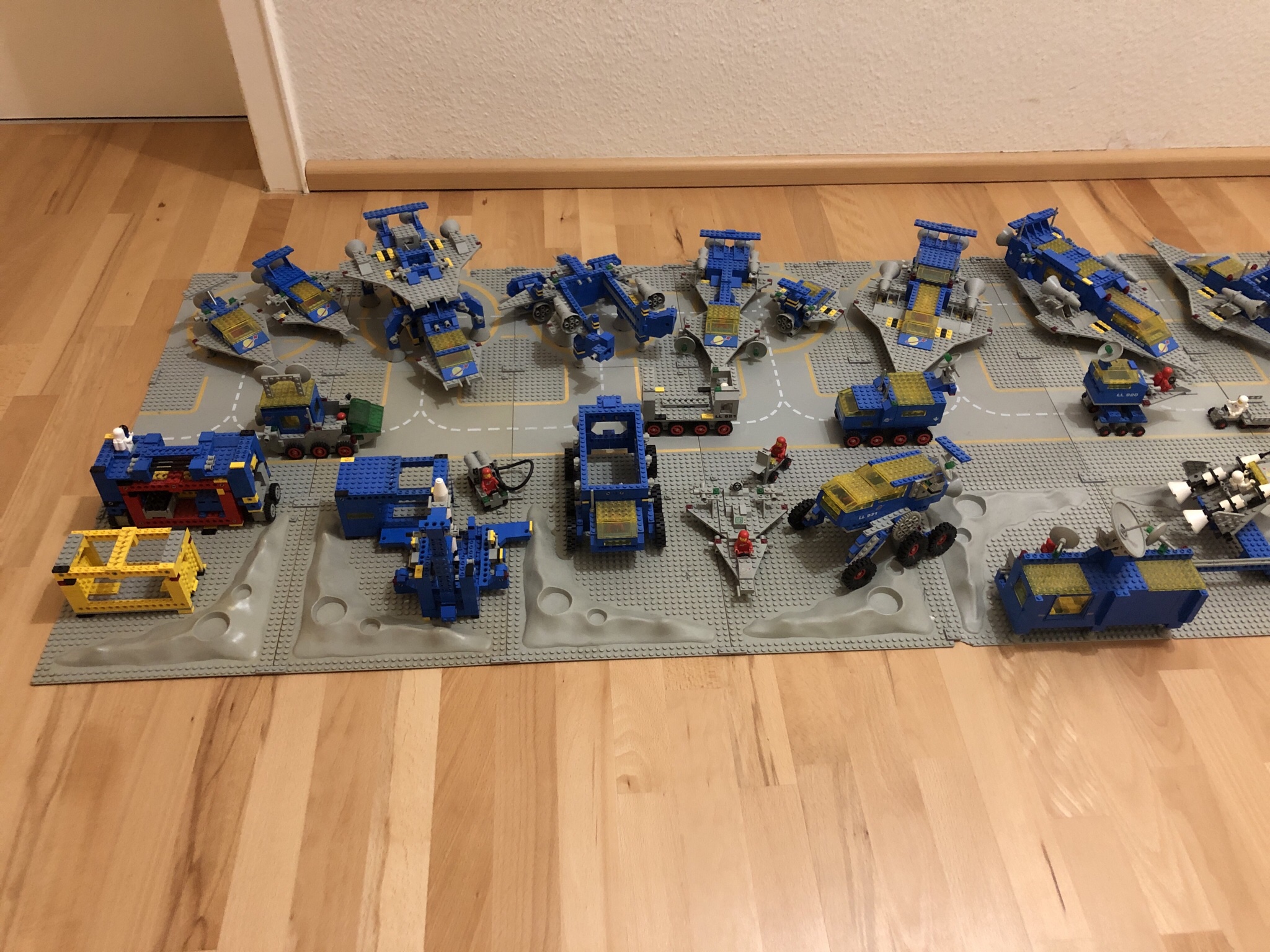 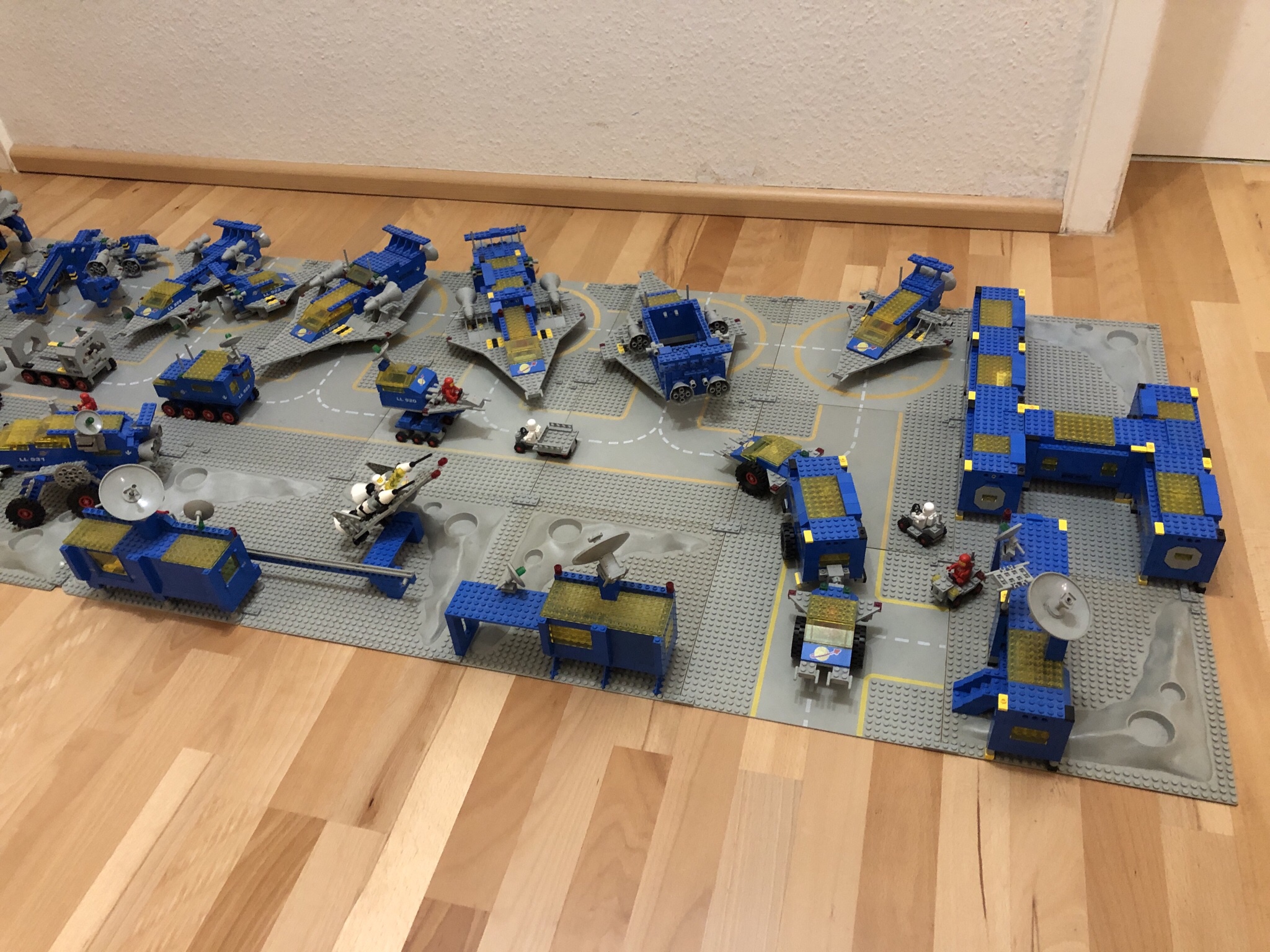 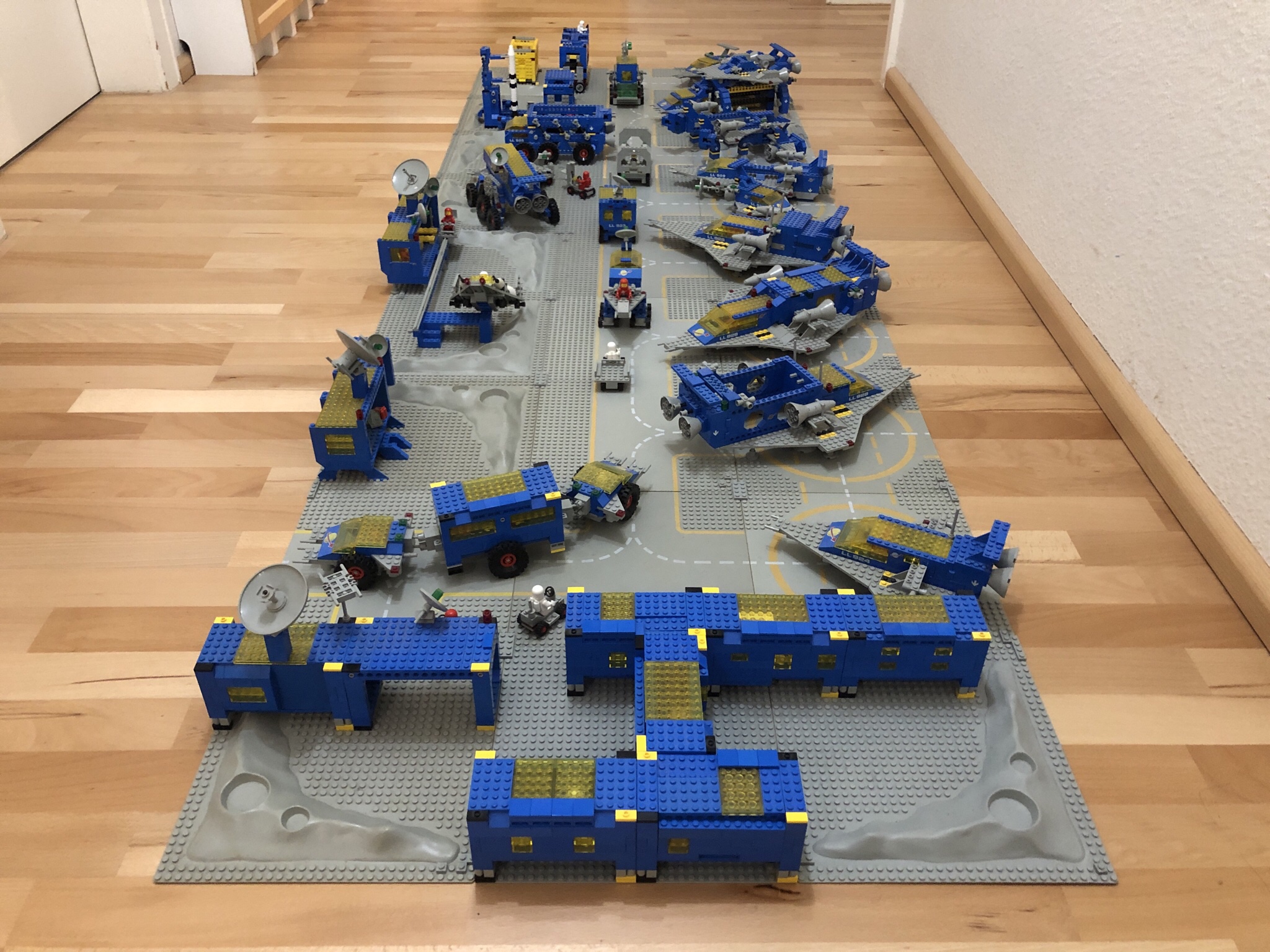 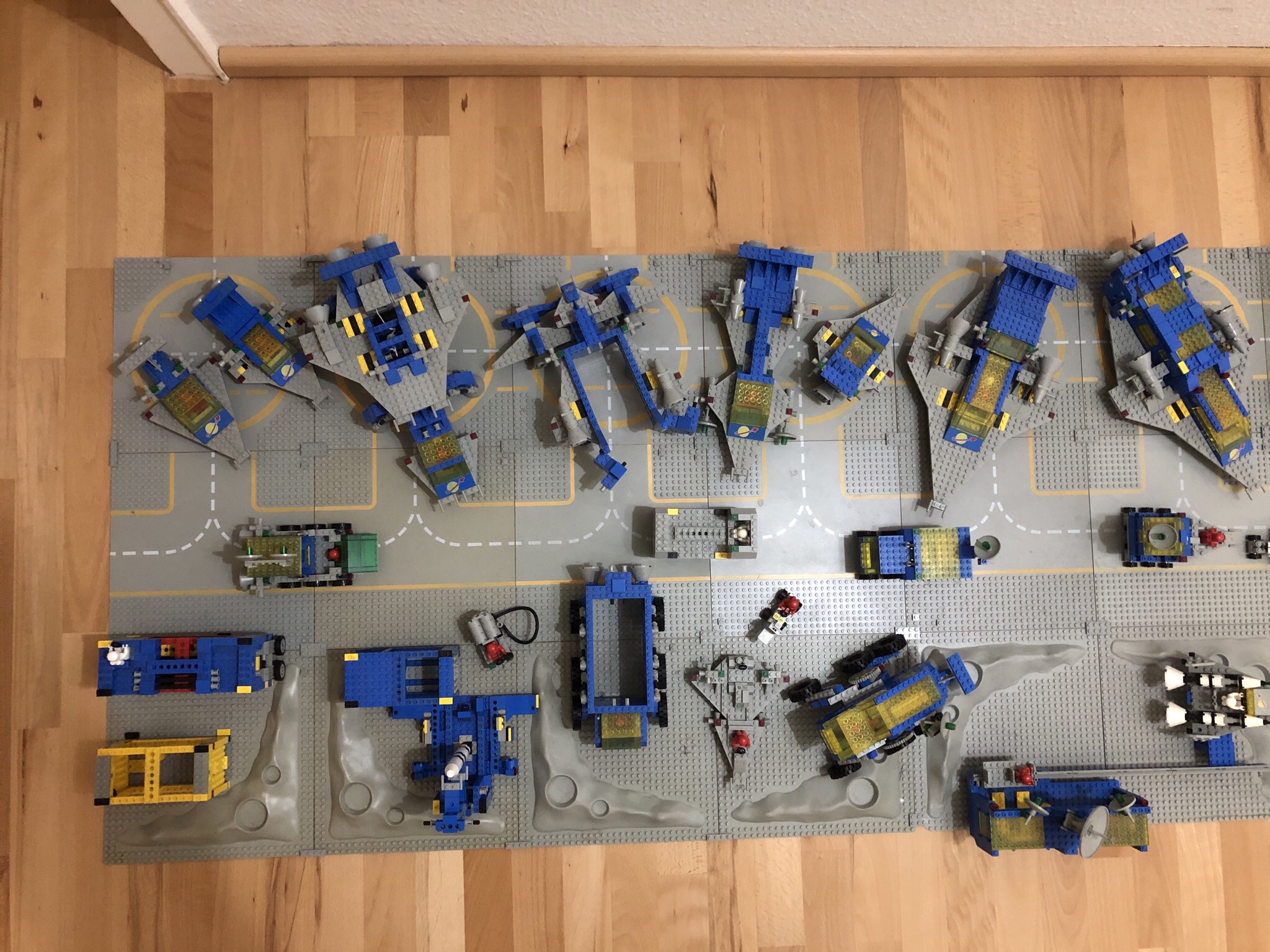 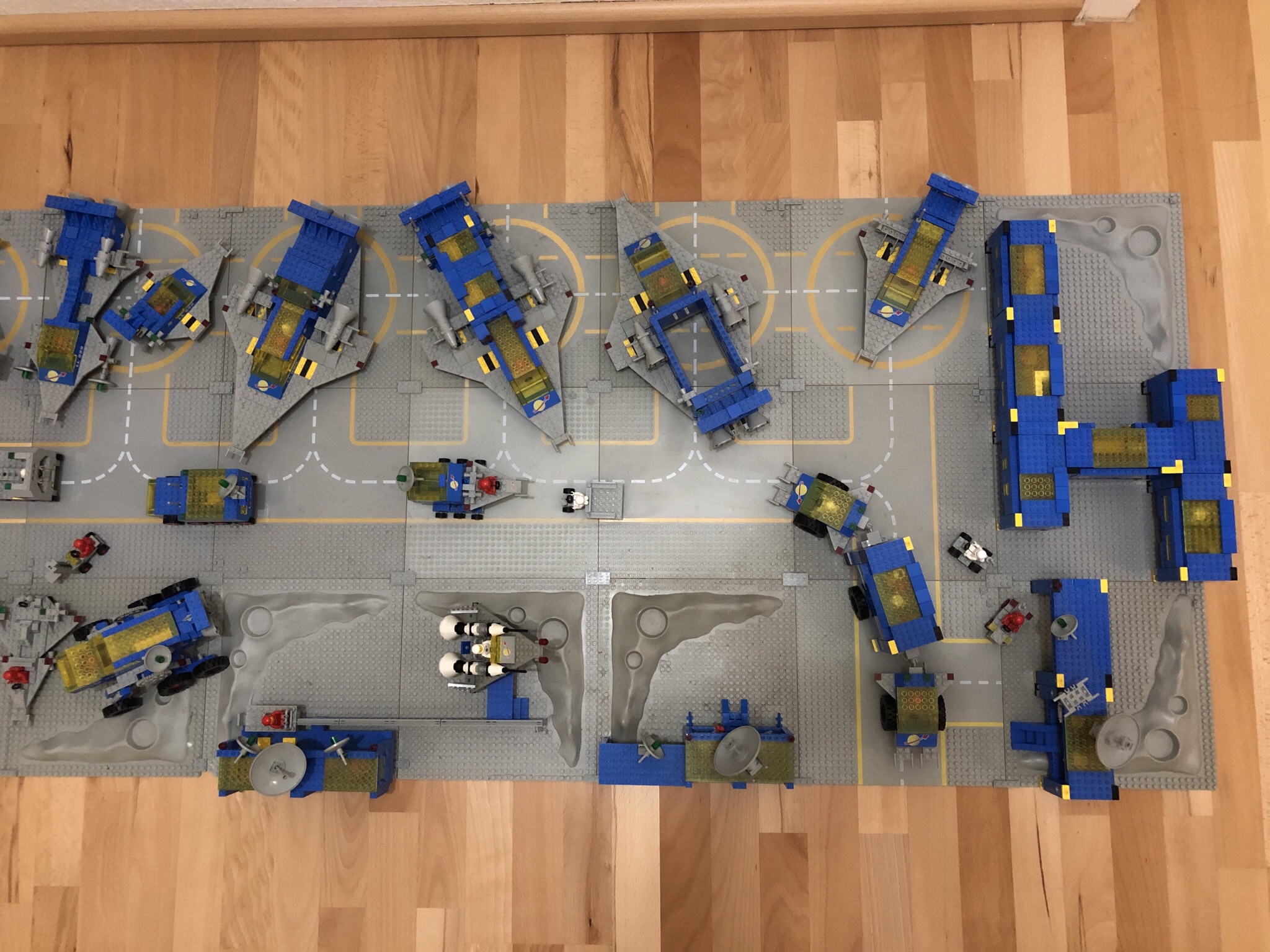 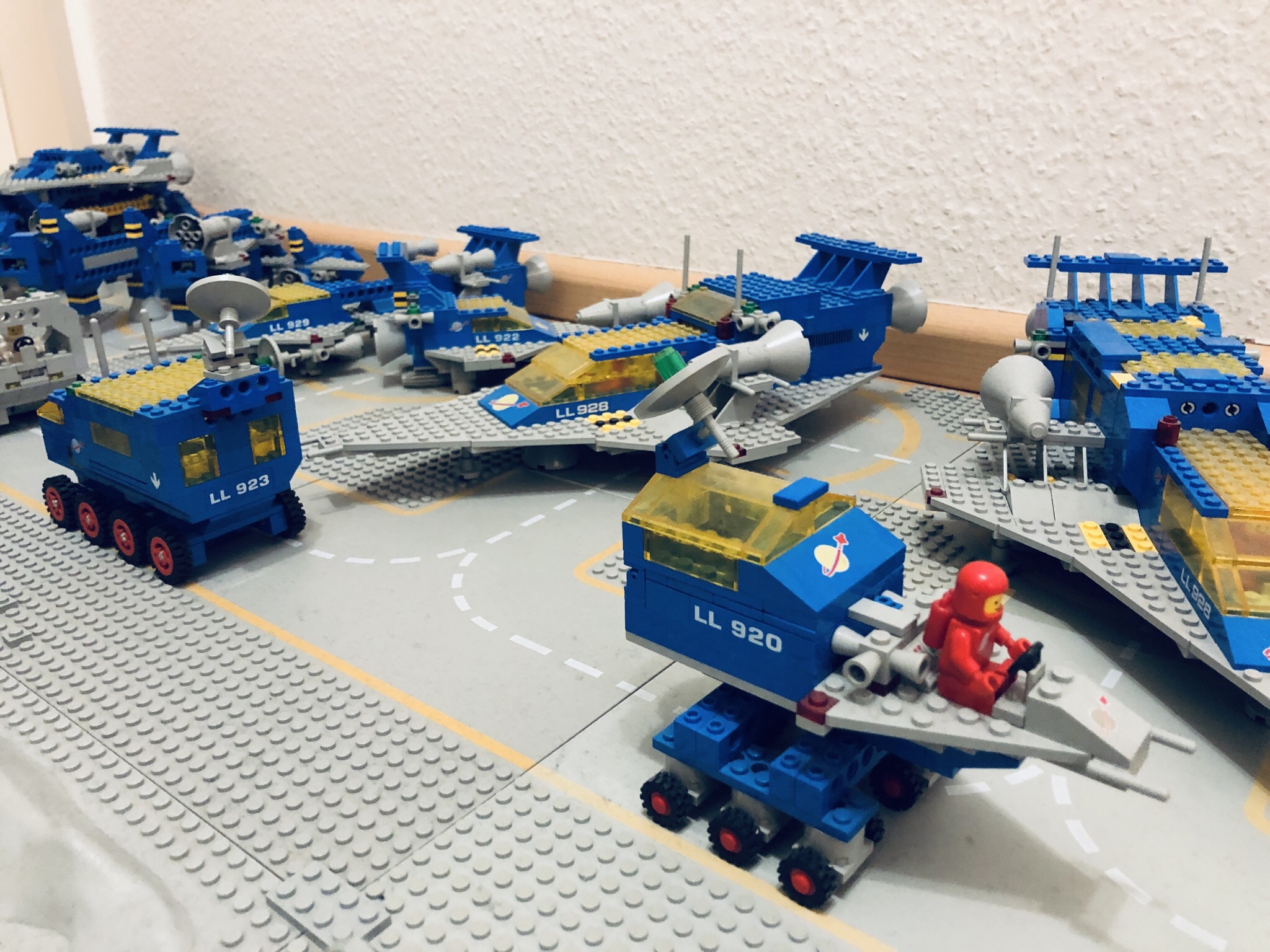 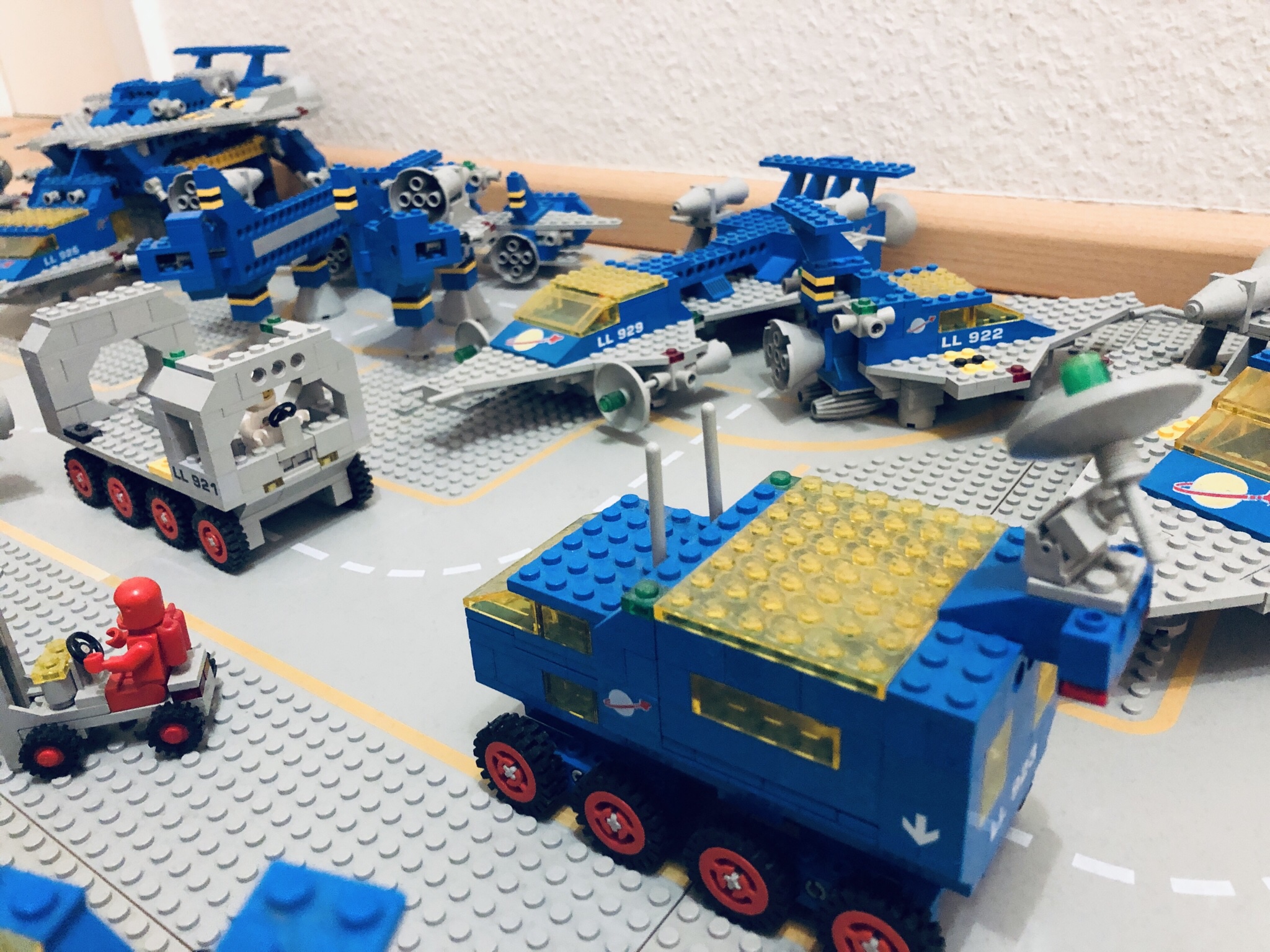 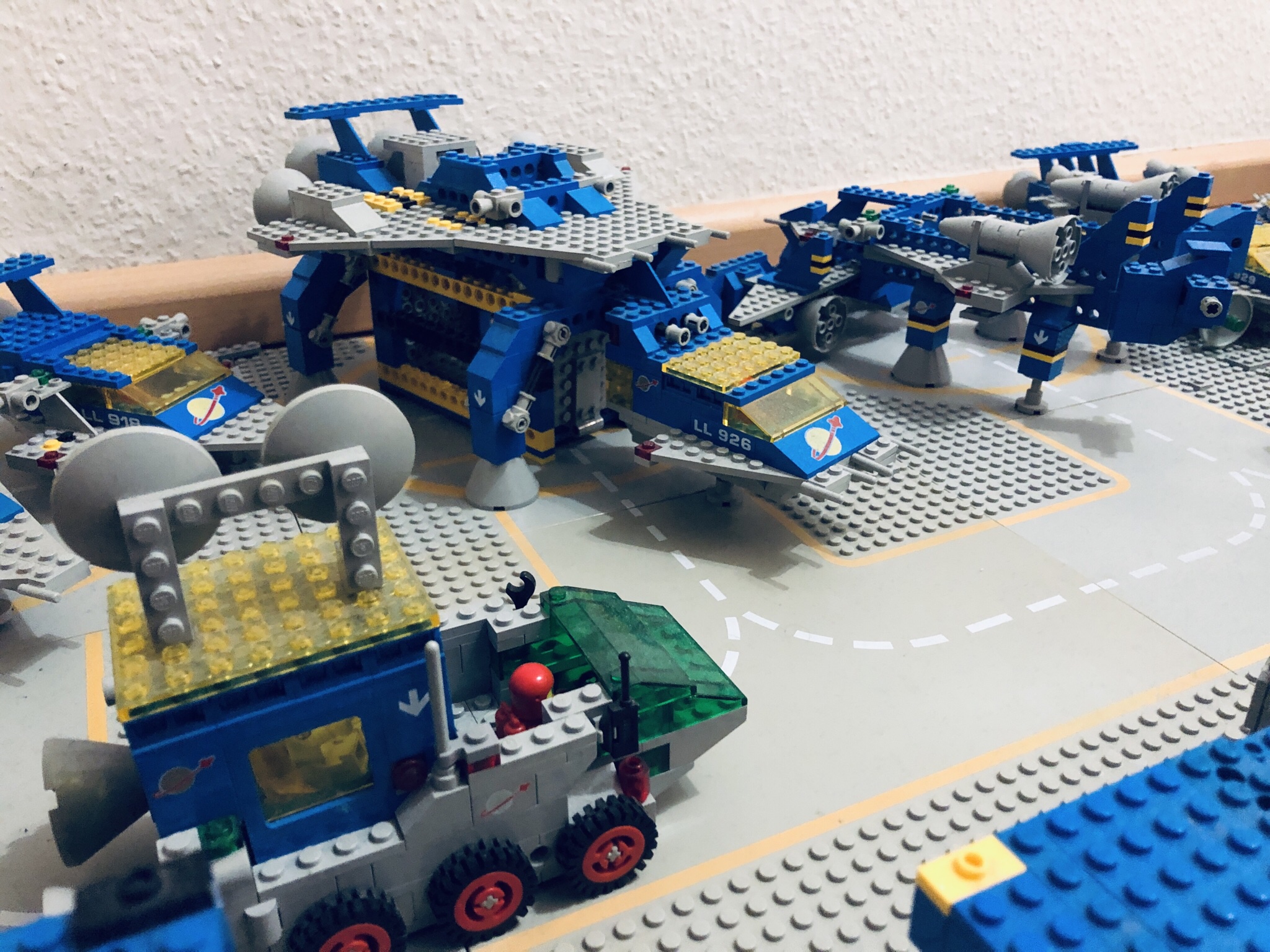 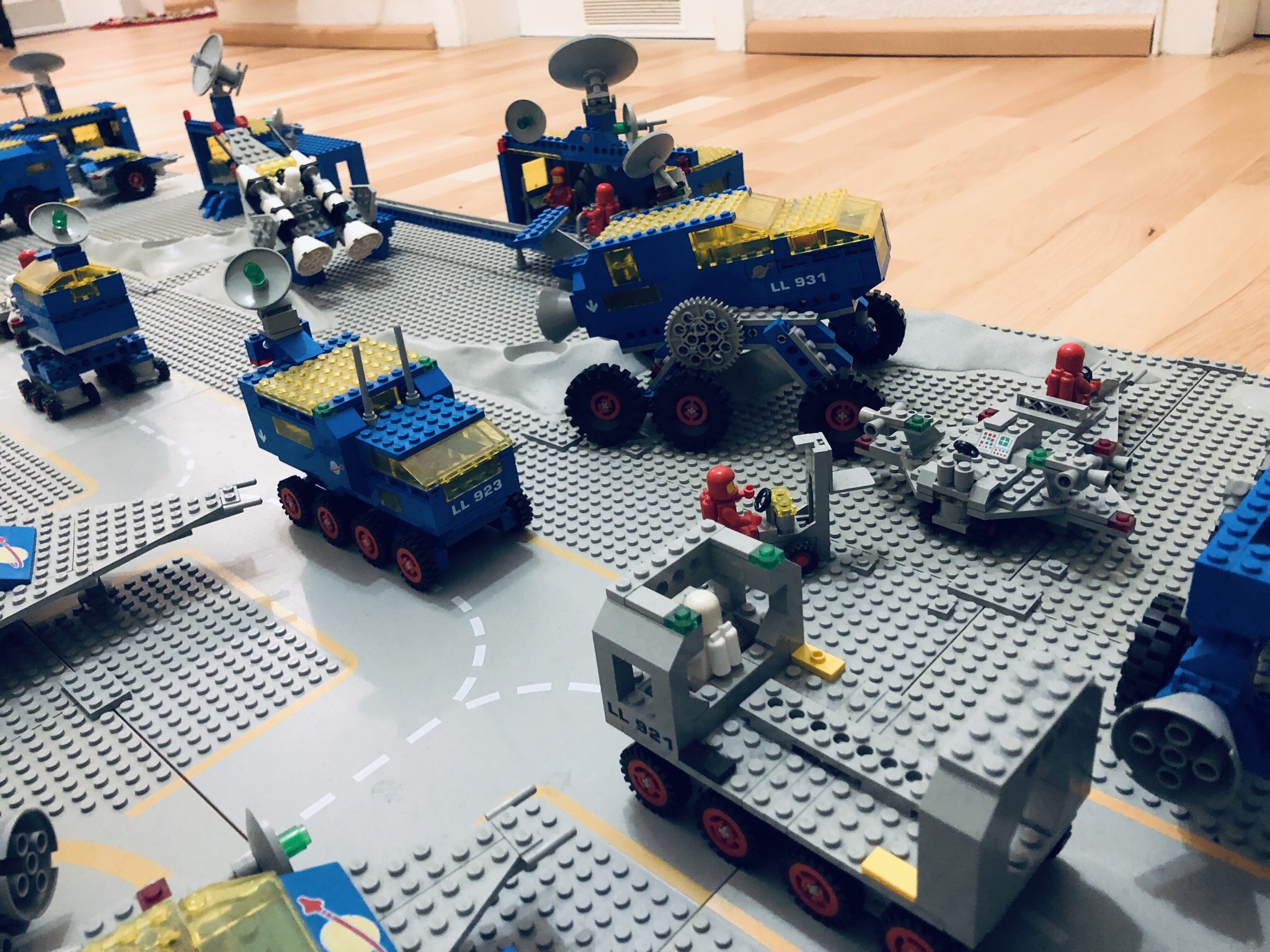 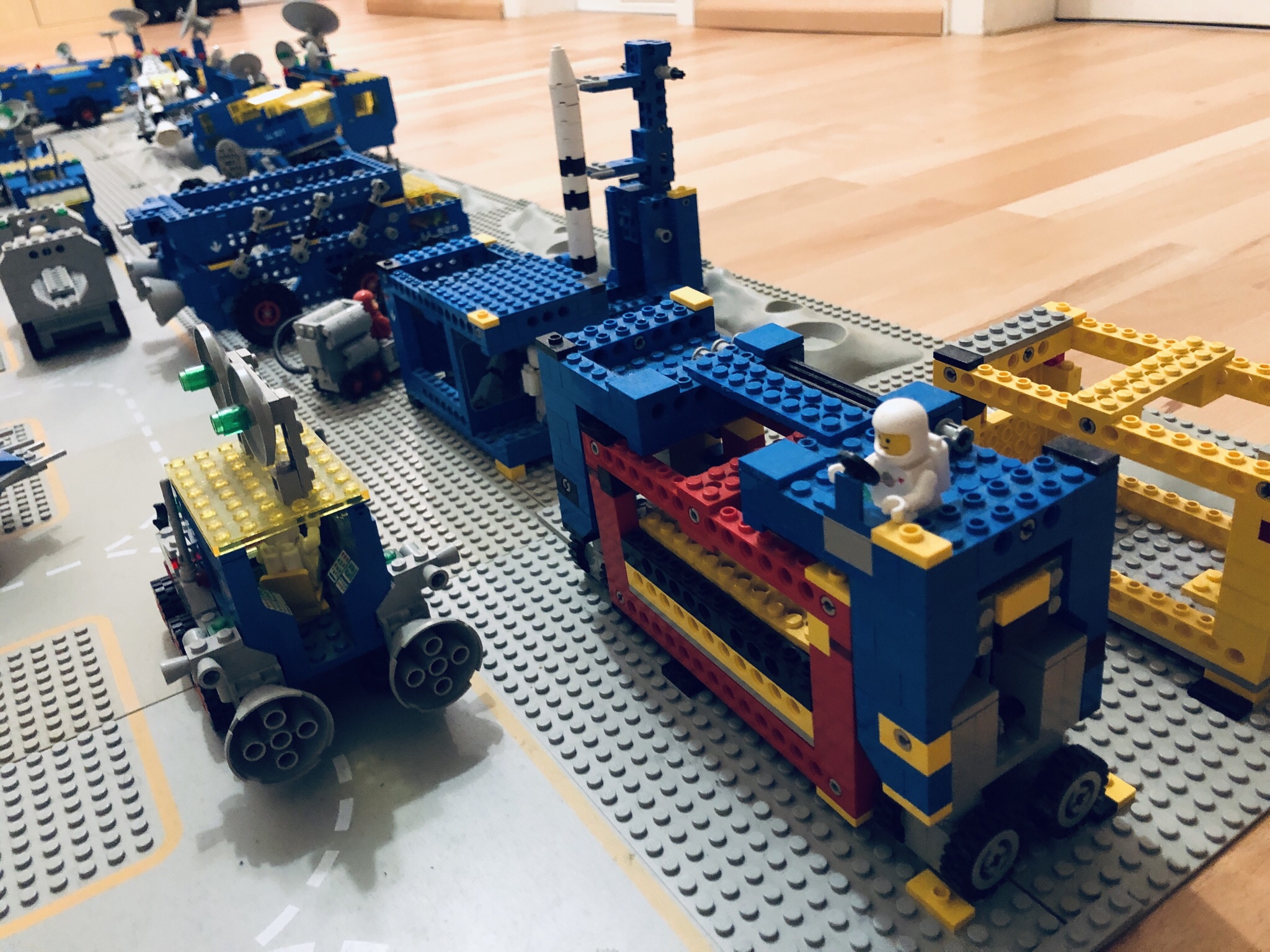 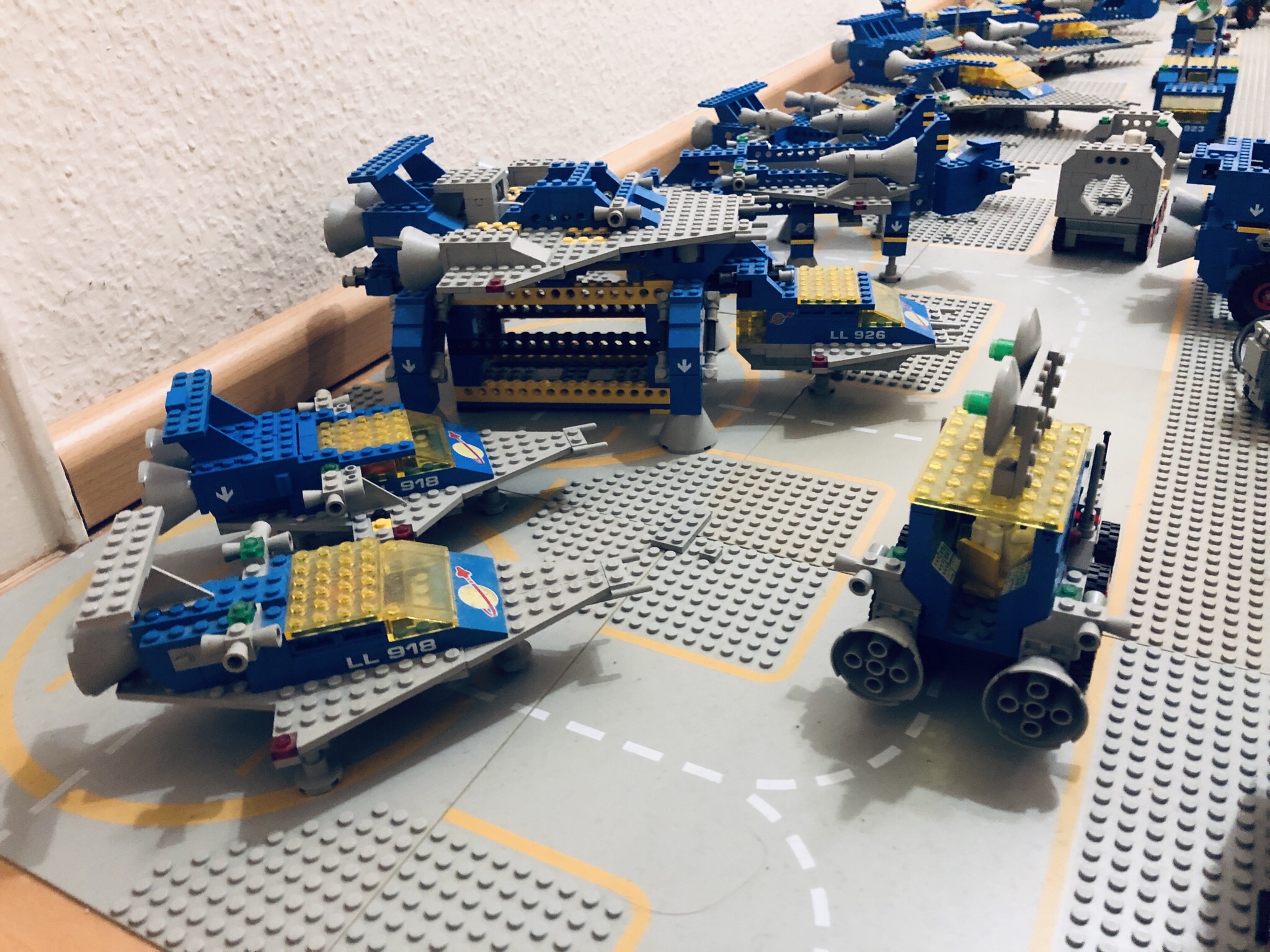 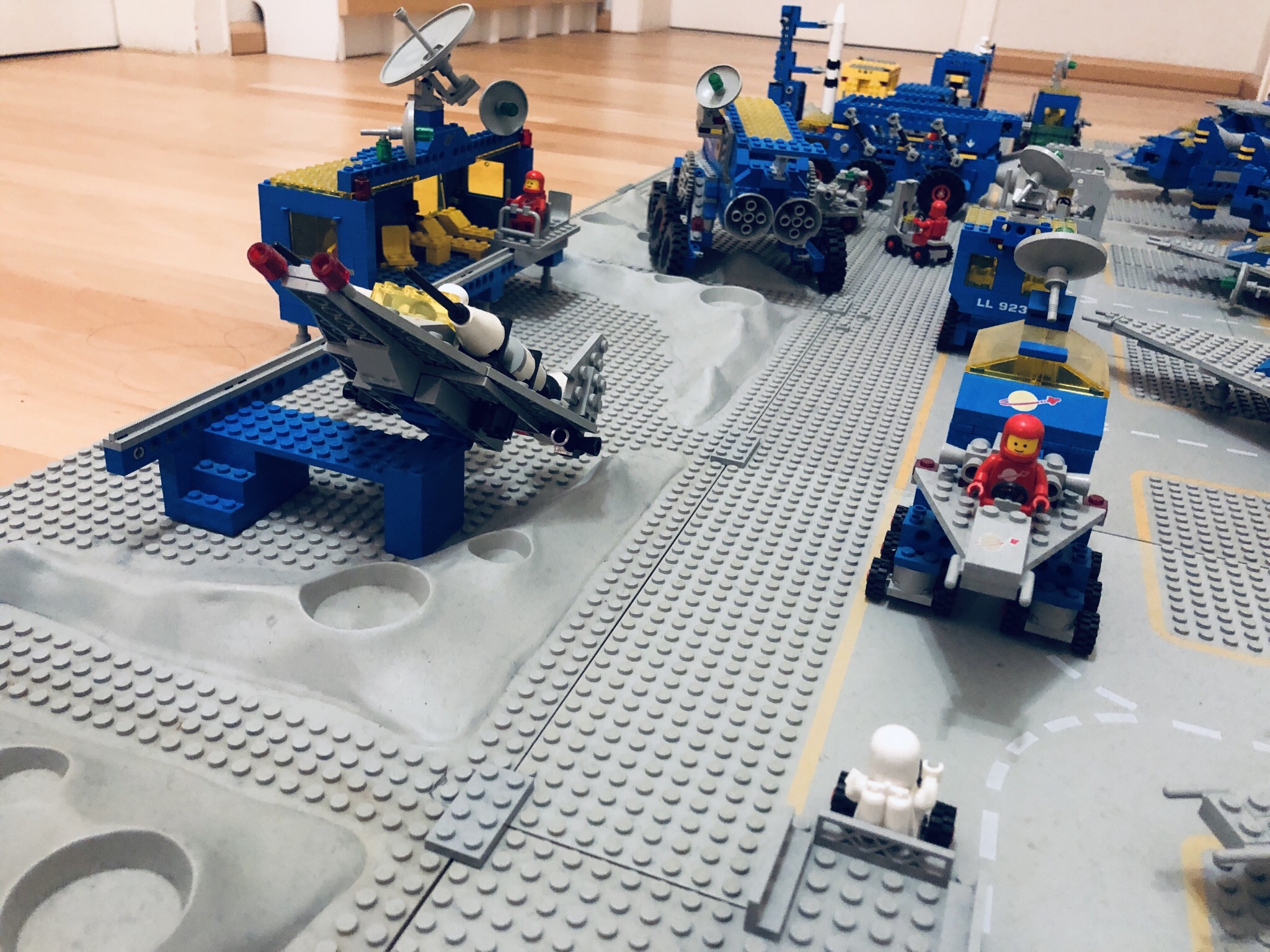 That’s it, my Lego Classic Space Generation 1 Moon Base  with 27 baseplates. It’s my biggest Lego project so far and really a childhood dream come true :-))